My last blog post provided pictures of my Hawaiian-themed painting at the end of each of six art classes (the sixth class was the final class).  This blog post provides a glimpse into my psyche and describes how I set out to complete the painting on my own (that is, now that my art class had ended, and I was left to my own devices).

Let me put things into perspective.  This painting was a patient in need of reconstructive surgery and I was not a doctor.  This art stuff is complex, and if I learned nothing else from the art class I had just completed, I learned I actually knew little about what makes for a successful abstract painting and that my painting skills were woefully inadequate.
Let’s get back to my painting, shown below. 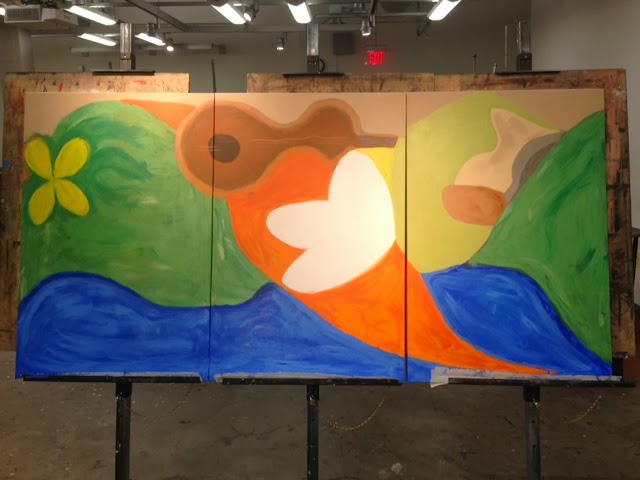 I schlepped this 6-foot-by-3-foot-wide monster from the art school to my home.  I stood the painting up on a counter in my basement.  I sat in front of it and pondered three options:  (1) burn it (outside of course), remove this blog from the Internet, and lie low for six months to avoid the shame I would feel from exposing my failure to the entire world; (2) dip wet paper towels in paint and hurl them at the canvas, hoping that eventually something interesting would happen; and (3) ask Aniko, my art teacher (you can see her impressive work at http://www.anikomak.com) to continue to help me complete the painting.  I chose option three and Aniko agreed to help me.  We’re in business.
With Aniko at my side, figuratively speaking, I waged an all-out war on this canvas.  Aniko provided me ideas via email and I worked the painting, snapped pics of the painting with my phone ‘s camera, and emailed her pictures of my progress every step along the way.  Aniko critiqued my work, and I kept going.  This is how we worked it.  If this painting was a war, then each object in it represents a significant battle with mass casualties.  I spent 30 to 40 hours or more per week on the painting, staying up until 1a.m. frequently, all the while working my “normal” 9 to 5 job and raising two kids.  Not much time for TV or folding laundry (sorry, honey!).  I have no idea where this energy and tenacity came from.
Back to the painting.  As a first step, and as illustrated in the picture below, Aniko (using Photoshop) created a mock-up version in which she addressed problems with my real painting.  She made it visually interesting and managed the composition by adding various objects such as trees, a path, etc.  In my mind, my assignment was to paint what she had done in the image.  More importantly, this marked a new chapter in the life of this painting, taking us in a whole new direction.
Pic of Aniko’s Design

In attempting to paint a tree, a path, etc., as in Aniko’s image, I messed up just about every time I touched the painting.  The problems seemed never-ending.  I would paint one object, only to need to paint it over and over and over.  And when I finally felt good about an object I painted, and proudly emailed my pic to Aniko (fully expecting a positive response), Aniko gently burst my bubble, either telling me the object I felt so proud of “needed more work” OR had caused a new problem:  That color too bright.  That shape too straight, too curved, too pointy, too large, too small, too busy, too sloppy, or some combination or permutation of them.  This could have been a reality TV show on the HGTV network (actually it probably should be!).
Aniko became a gentle and thoughtful artistic drill sergeant and I was in Art boot camp.  Surprisingly, I never felt like giving up.  Rather, I found the experience rewarding and critically important.  Moreover, judging by the myriad email exchanges and new images Aniko would create using Photoshop from that point forward, I began to appreciate that she was working almost as hard as I was and cared equally about the painting’s success.
My next blog post, titled “On My Own, Sort Of, Part Due,” will illustrate the problems I encountered and eventual solutions Aniko and I found as I forged ahead with the painting.